With flowers sprouting and the sun shining, Spring has got to be one of the best seasons. There are certain traditions that come with the season though, like chocolate eggs, candy, and bunnies! Those traditions have spread to LoL too, giving us plenty of Easter skins.

If you’re fortunate enough to have enough friends to play League of Legends with, then perhaps you want a team of Easter skins. That’s why we have included 1 Easter Skin for each role! Let’s start things off with a fan favourite; 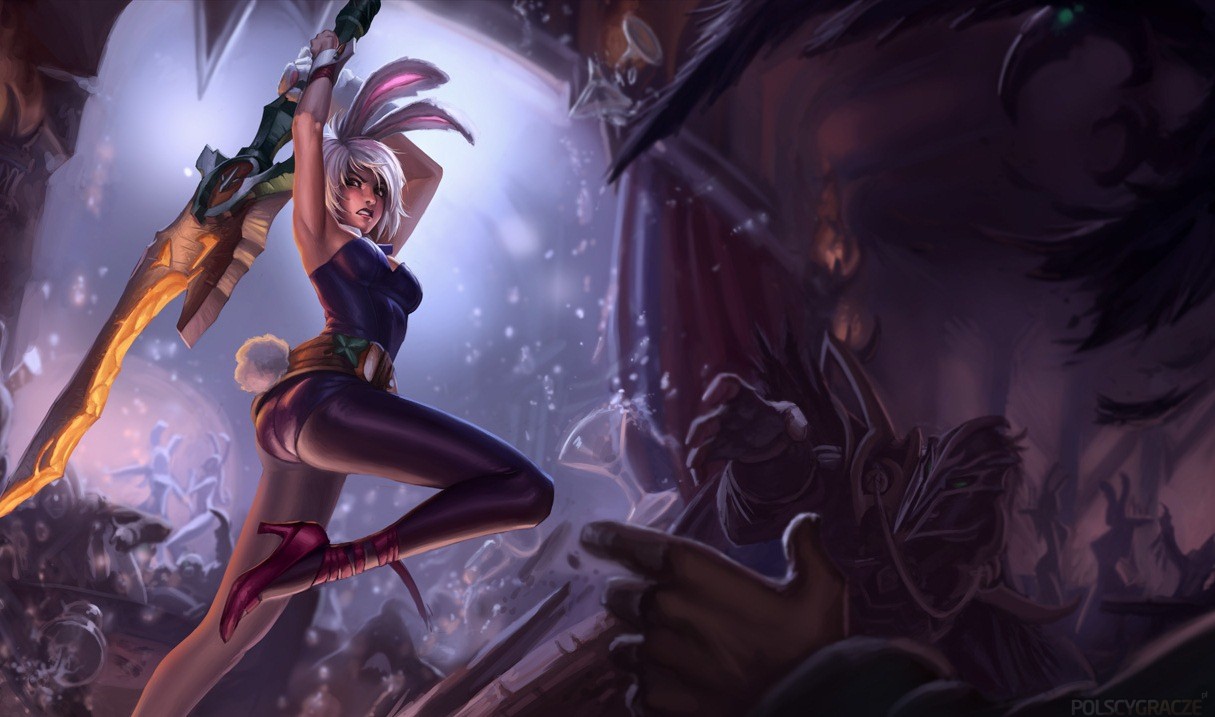 This skin sees Riven dressed up as a Playboy Bunny. In her splash art, she poses with carrot sword raised high. There’s a lot to take in with this splash art, and it’s undoubtedly one of Riots best. That being said, not all in-game skins live up to their splash art.

We’re glad to say that Battle Bunny Riven certainly does! The giant carrot that doubles as a sword is clearly the best part of this skin, but there’s plenty more. Her tightfitting outfit is sleek, yet simple, and the little bunny tail adds a bit of cuteness.

This is one of those skins that we didn’t realize we needed until we had them. The way she hops around the battlefield feels much more fitting with a pair of bunny ears. 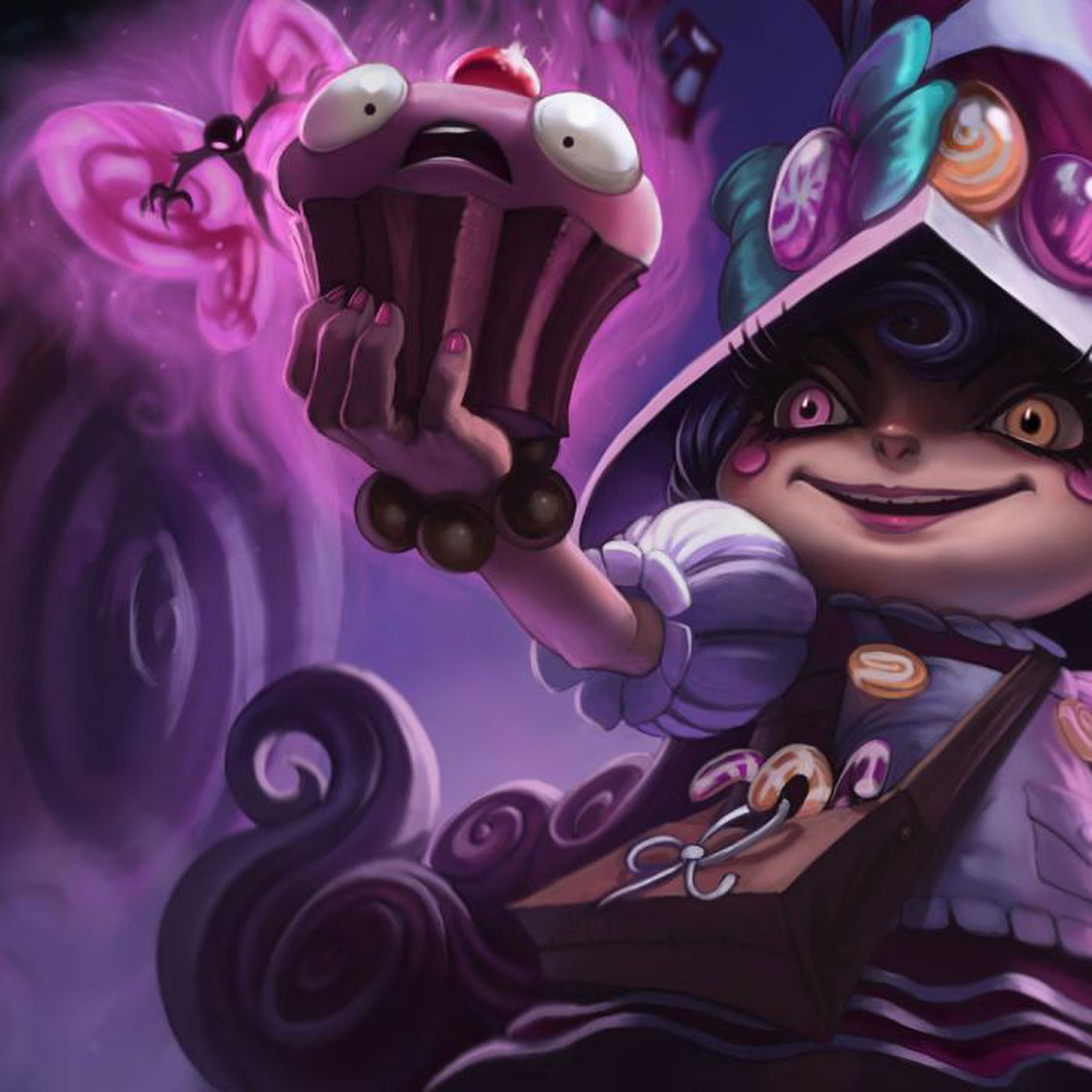 You might argue that this Easter skin works better as a Halloween skin, after all, Bittersweet Lulu is all about the candy. We’re here to tell you that no single holiday has a claim on candy. It’s Christmas? Eat Candy. It’s Halloween? Eat candy. Easter? Candy.

People just love excuses to eat food that’s bad for them, but this does come with a benefit; You don’t have to purchase new skins to celebrate the different holidays, as Bittersweet Lulu fits them all! Her excitable personality is also perfect for the holiday.

Hardboiled sweets sit atop her hat, and polymorphed enemies now turn into adorable cupcakes – although, these cupcakes become less sweet when you think about how they used to be people, still; an all-around great Easter skin to sink your teeth into. 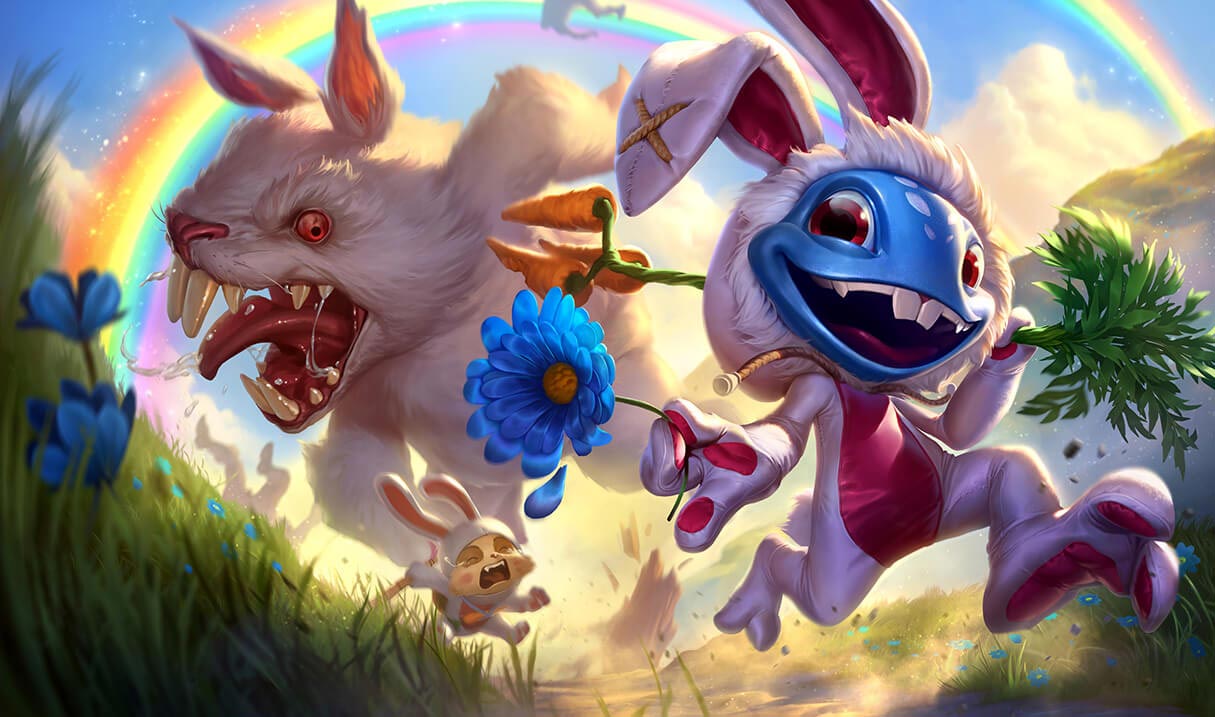 We’re surprised that Riot hasn’t released more Cottontail skins, given how simple they are. Cottontail Fizz is just Fizz wearing a bunny onesie and wielding a carrot trident. The result? An adorable Easter skin that has become the favourite of Fizz fans.

There are a few other changes of course; Where other skins transform Fizz’s shark into a Killer Whale, or a Void beast, Cottontail Fizz goes a step further.

When you hit R, a carrot flies forward. This unfortunate carrot clutches its head in despair as it circles Fizz’s prey. After a moment, a giant mutant rabbit erupts from the dirt. Sure the red eyes might put some people off, but we think that this rabbit is just precious.

Oh and there’s one other thing that makes Cottontail Fizz stand out; He has a charming set of buck teeth. Don’t be deceived though, these teeth also happen to be evidence of his crime. Looking at his trident, it’s clear that something has been nibbling at it. Two teeth seem to have chomped into the carrot, teeth that are shaped suspiciously like Fizz’s. This poses an interesting question.

Is Fizz actually just dressed up as a bunny, or does he actually believe he’s one? Perhaps he made a dark pact with the mutant rabbit. Fizz isn’t commanding it, it’s commanding him.

Or maybe we’re just digging a little too deep. Either way, this is a brilliant Easter skin that you do not want to miss! 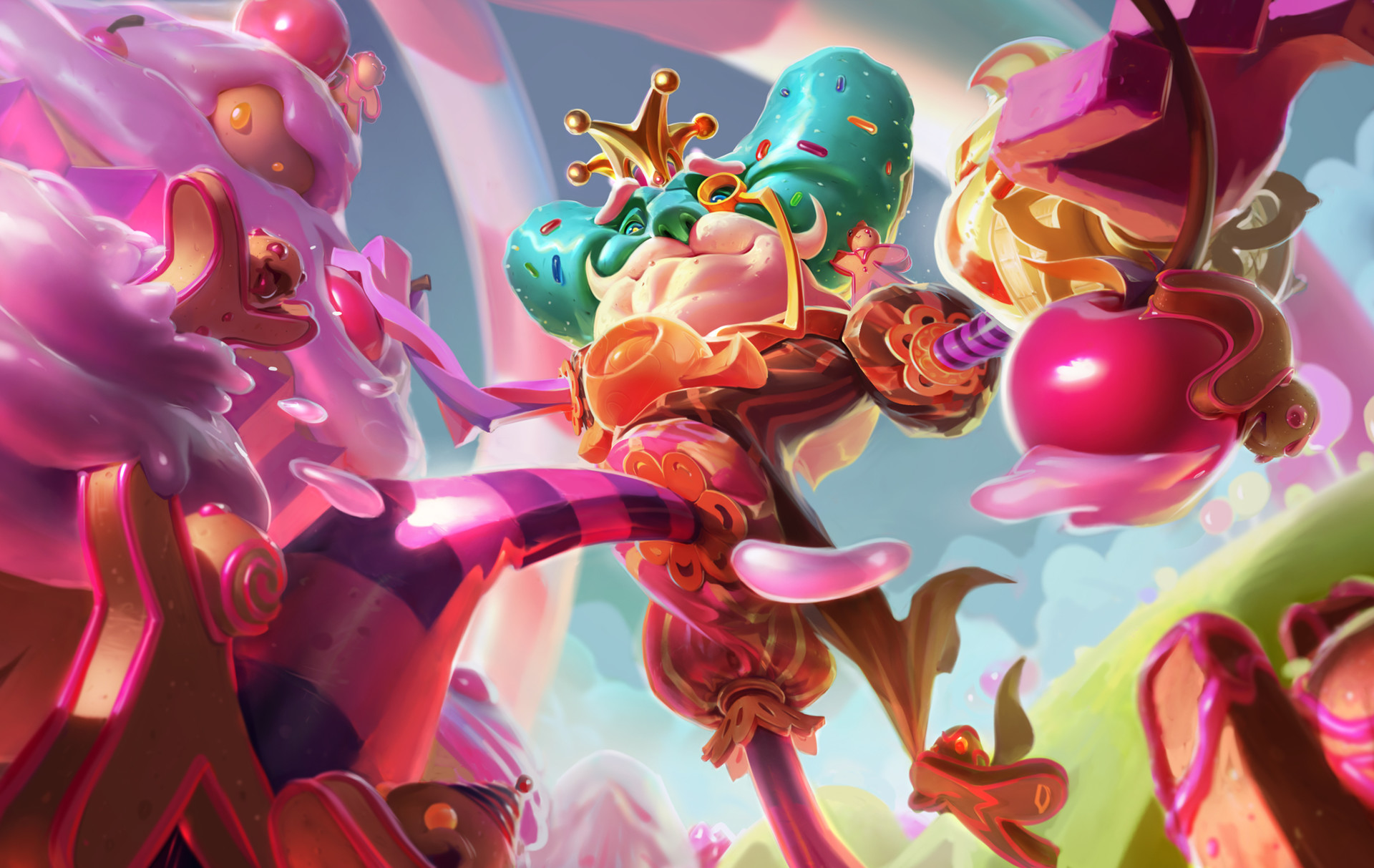 Easter is all about over the top bright colours, and that’s what this Easter skin offers. Plenty of candy is also included, in fact, Ivern himself is crafted from nothing but sweet snacks.

His head is a large doughnut, or at least, half of one – perhaps he ate the other half, and we don’t blame him; those sprinkles look delicious. He also wears an orange doughnut as a monocle. Yes, you can be classy and a snack. It’s 2020.

His lanky legs and arms seem to be made of liquorice cables, and in those cables, he cradles an ice cream cone. It’s not just his appearance that is perfect for Easter though, his abilities have also received a couple of tweaks;

His bushes are now littered with candy for your Cho’Gath to snack on while he waits for unsuspecting prey. Other snacks are available, however, such as Red and Blue buff!

Now, whenever Ivern frees one of these two buffs, they leave behind an orb in the shape of a candy. A true easter treat for your mid laner to enjoy, and for them to be ungrateful for. There’s one ability that really takes the cake though, and we can’t go without mentioning her.

Candy King Ivern commands a Cupcake Golem capable of icing the enemy team in seconds. When Daisy lands an auto-attack on someone, a cupcake indicator appears above their head. Should she land enough hits to ice the cupcake, the ground cracks apart, firing out an assortment of sugary goodies.

Daisy has a cute party hat on, to lull enemies into a false sense of security. She’s topped with cherries and, uh, a smoothie. We’re not sure why she has a smoothie on her back, but we’re not going to question her. 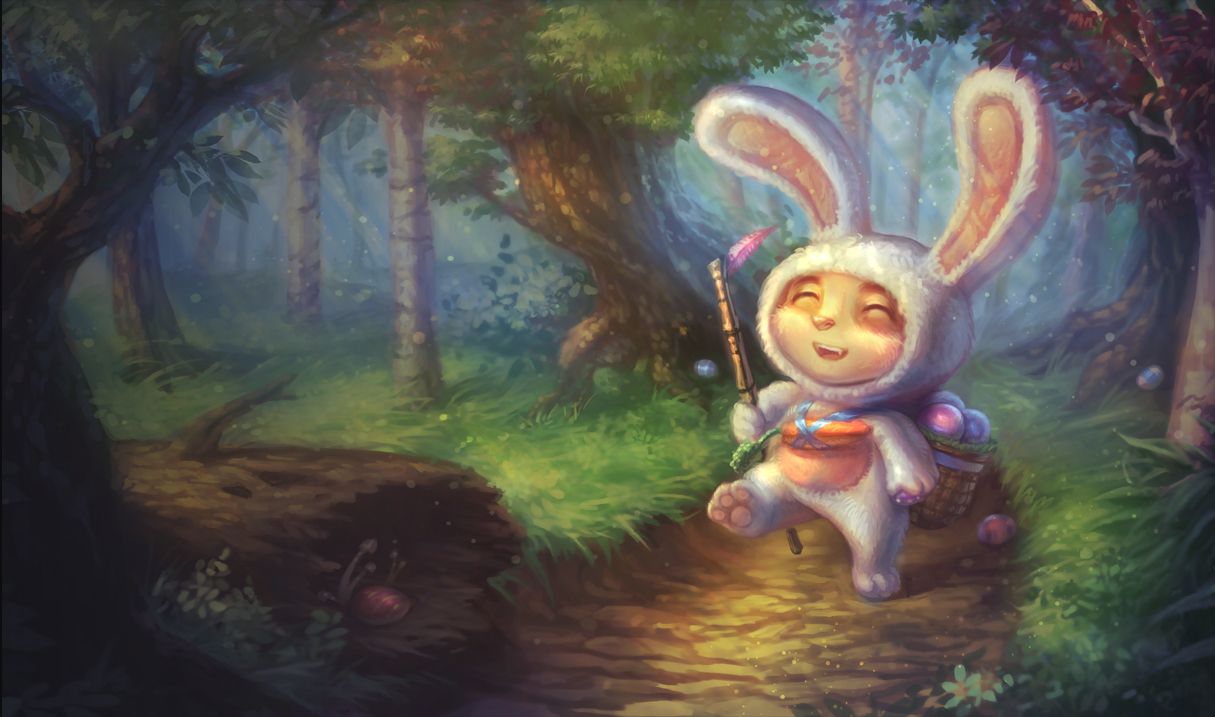 When you think of Easter skins, chances are that Cottontail Teemo is the first you think of. Not only does Teemo come with his own cute bunny onesie – complete with carrot – but he also has plenty of eggs to share.

Cottontail Teemo’s eggs usually stay put on his back, but once you hit 6, the fun begins. Should your opponents be foolish enough to wander into the Jungle, they’ll quickly find themselves staring at a grey screen.

Riot also changed Cottontail Teemo’s walk. Now you can fire a few darts at your enemies and then hop off – just make sure to spam laugh while you do. If the plain white colour that Cottontail comes in is not for you, you can add a splash of colour to it.

You can turn Cottontail Teemo pastel pink or blue by picking up a chroma, but you can also make him look like a cow! Plus, he only costs 975 RP, so you won’t have to shell out much cash.

If you have read our post about the best St Patricks Day skins, you will know that the rarest skins are no longer available in the Riot store. If you're looking for some truly hard to get skins, be sure to visit our Smurf store!