St. Patrick’s day is right around the corner, but are you ready for it? Sure, you can grab a green hat and toast your teammates, but you need something in-game to make the occasion count. 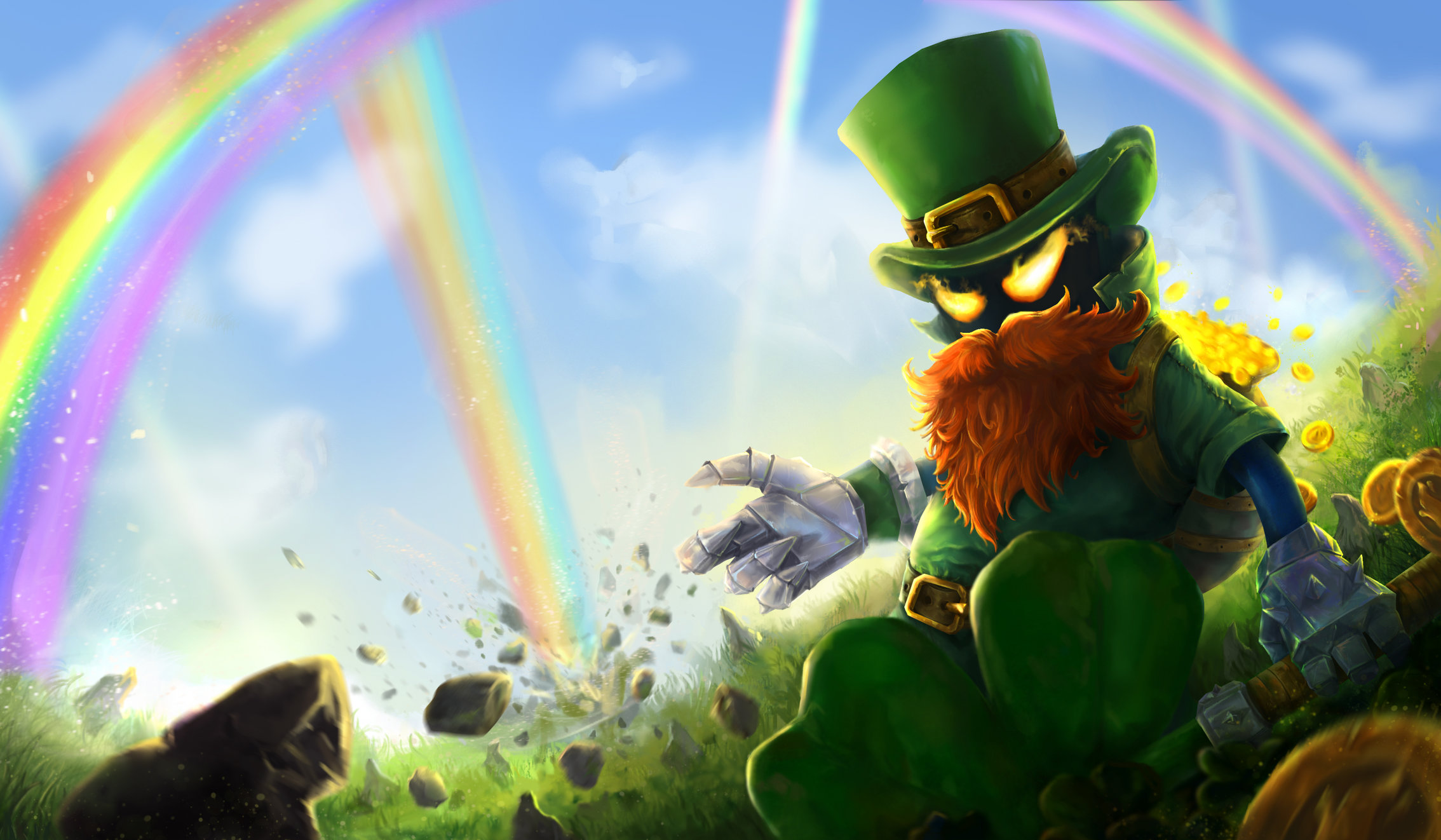 This Veigar skin couldn’t be more appropriate for St. Patricks day – not even if you stuck a pint of Guinness in his hand! Along with some buckled boots and a lime-green bowler hat, he now holds a giant four-leaf clover in place of his staff. Not only that, but he also sports a majestic orange beard and carries a pot of gold around with him.

Then we have Event Horizon. Veigar’s signature stunning ability is now coated in four-leaf clovers, which is anything but lucky for his foes. This St Patrick’s skin is definitely one to consider, especially when you take into account the low cost!

Leprechaun Veigar is available for the low price of 520 RP, and with all the new animations, it’s certainly worth it! 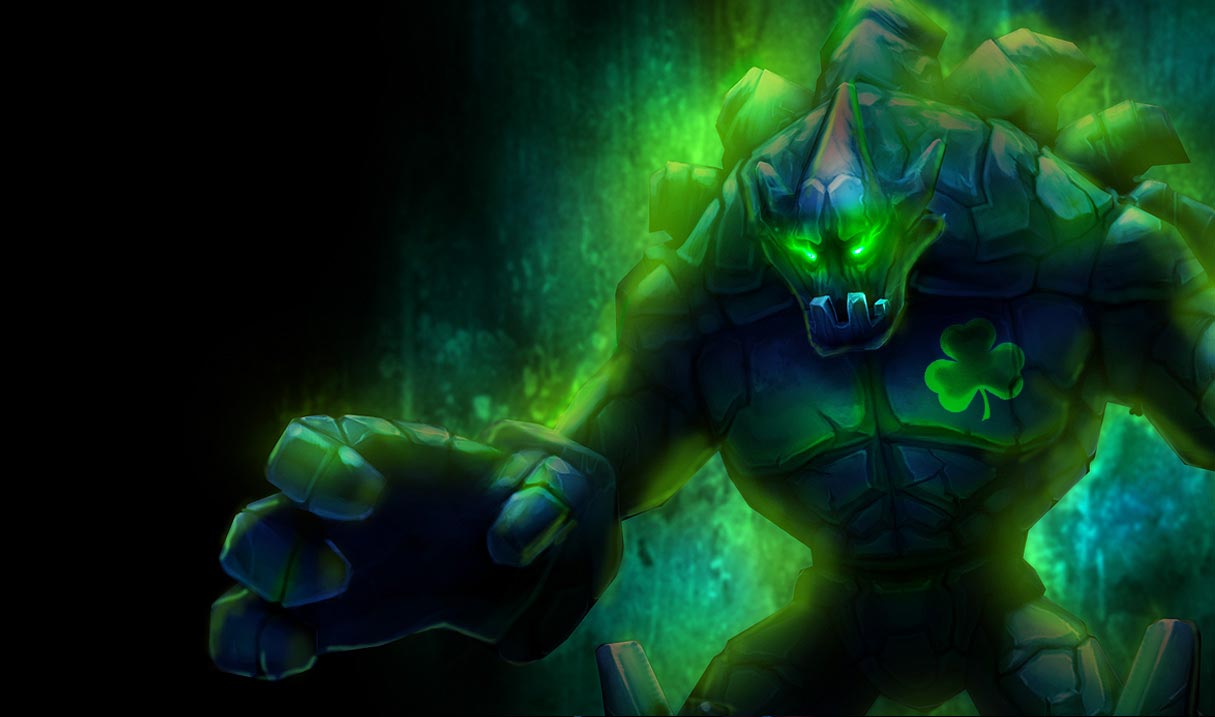 We are convinced that Riot created this skin just because they thought of a punny name. We have to give it to them though, Malphite looks great in green.

On the surface, this looks like regular old Malphite, with a little less rock and a few more Emeralds. The truth is, you’re right, but he could offer so much more. First off, he still looks alright, the green colour is a nice change, and it fits the theme of a St Patrick’s skin. Sure, he doesn’t have a pot of gold like Leprechaun Veigar, but that’s because he’s the real treasure.

Shamrock Malphite is a Legacy skin, which means that it’s only available on special occasions. If that doesn’t tempt you, this skin costs 520 RP. Why are we telling you this? Because people aren’t happy with it, and Riot has a history of changing skins that people dislike.

For instance, Red Akali and Kingpin Twitch were both trash tier Legacy skins, but then they were reworked. These skins transformed into masterpieces worth far more than their original cost. This is likely going to happen with Shamrock Malphite soon too. Maybe they’ll even dress him up as a Leprechaun, after all, there aren’t enough Malphite skins that have him wearing clothes.

In our opinion though, Shamrock Malphite is still worth the RP, even without the changes. After all, what could be more Irish than a Champion that looks like a potato with a Shamrock pinned to his chest? 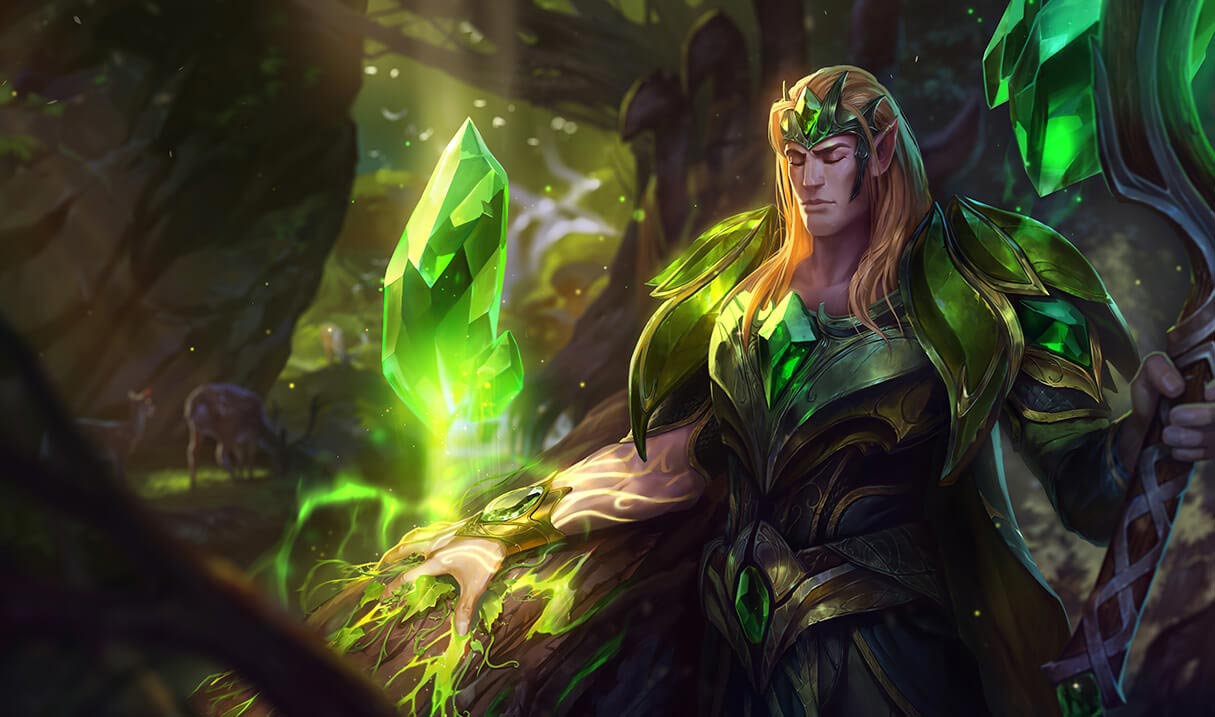 Alright so technically this skin isn’t an official St Patrick’s day skin. That being said, it’s just as appropriate as Shamrock Malphite is, and here’s why;

First off, his armor is completely green – okay perhaps not completely, there’s some tan and olive tones thrown in there, but it’s 90 per cent green. His gemstones are now sparking emeralds, and then there’s his weapon. In place of his hammer, Emerald Taric wields a mace crafted from silver, leather, and a fat emerald. There’s a certain natural element that Emerald Taric has about him, making him a good fit for a Saint Patrick’s Day skin. If you’re a fan of more subtle skins, this is the one for you.

As we mentioned before, there’s not as much green here as other skins offer, but your eye is always drawn to the green sections. His leaf coated arms lead down to shining bracers of green. His belt? Green. His head? Got a circlet on it. In that circlet? An emerald, bright and green.

His golden hair adds some nice contrast, but if that doesn’t do it for you, all his abilities are green too. When he moves, his emerald gemstones float around him like meteors orbiting a green, fabulous planet. 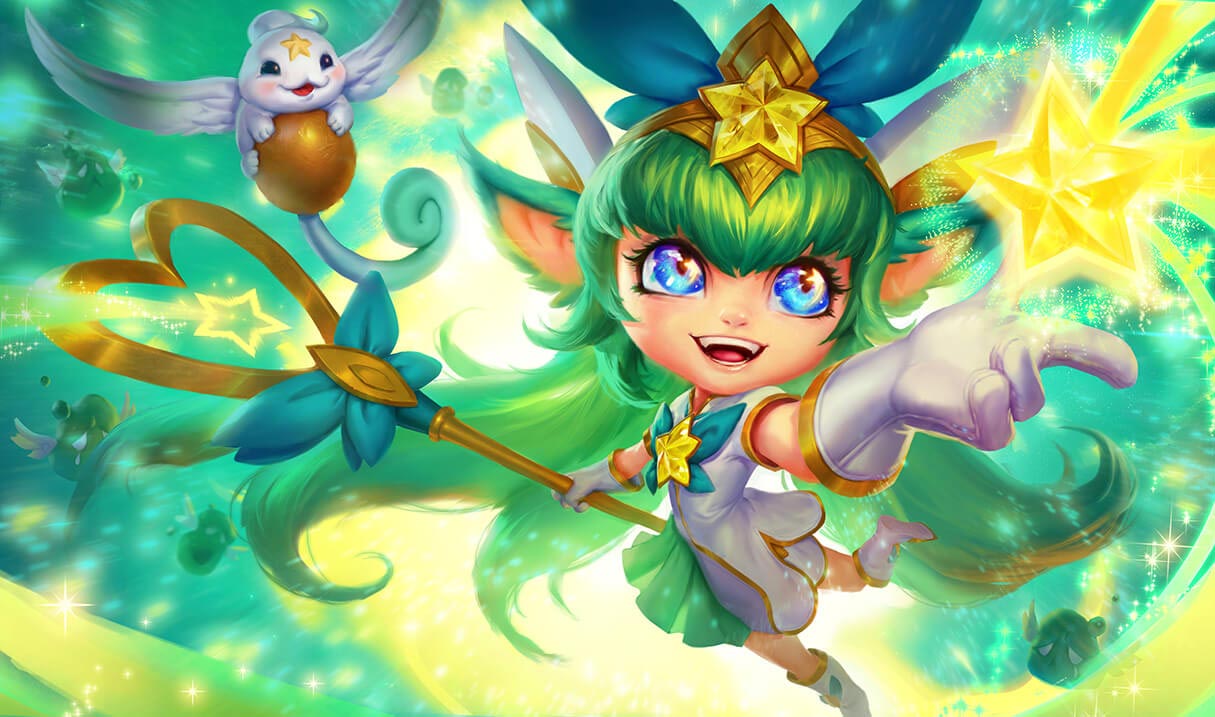 This one might seem like a strange choice. Sure she’s green, but she’s a glittery anime girl too. You might think that this has nothing to do with St. Patrick’s day, but hear us out;

It would have been easy to fill our number 3 spot with Battlecast Xearth or some other green skin, but we wanted to go deeper. Star Guardian Lulu, is actually a Leprechaun.

Okay okay, she doesn’t have the beard or the pot o’gold, and she isn’t a man either. She has the most important part of a Leprechaun though; the personality. She is also super green, and some of her abilities do look kinda like rainbows.

What makes a Leprechaun a Leprechaun is that, despite their tiny size, they’re larger than life. Lulu’s excitability and over the top happiness are both traits shared by Leprechauns. Leprechauns are often seen as slightly insane, and let’s be honest; Lulu is a few minions short of a wave. 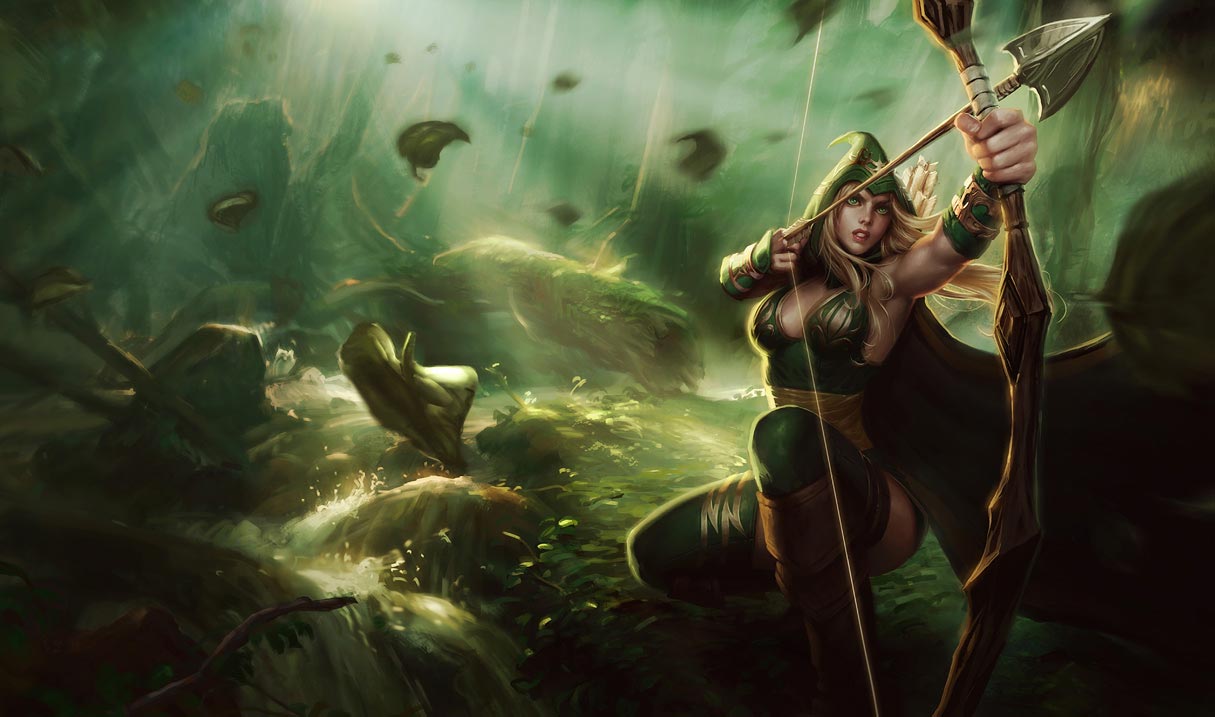 The truth is that a skin doesn’t have to be about Leprechauns for it to be classed as a Saints Patrick Day skin. Saint Patrick himself fought hard for what he believed in, if he didn’t, he would not be remembered. His main characteristic is one shared with Sherwood Forest Ashe, and that’s why she deserves to be on this list.

Visually, Sherwood Forest Ashe is clearly based on Robin Hood. The famed Archer actually lived in England, which is where St Patrick himself is rumoured to have been born. The colour scheme is, once again, glorious and green.

If you’re trying to put together a team of St Patrick’s Day Champions, then Sherwood Forest Ashe is well suited. The green of her cloak is murkier, more fitting as camouflage in a forest. This is nice, because if you have teammates wearing green skins that are a bit brighter – such as a Shamrock Malphite – it will create some wonderful contrast.

Another thing going for this skin is that there aren’t many green ADC skins – If you want a Saint Patrick’s Day Marksman skin, Sherwood Forest Ashe is far and away the best choice. 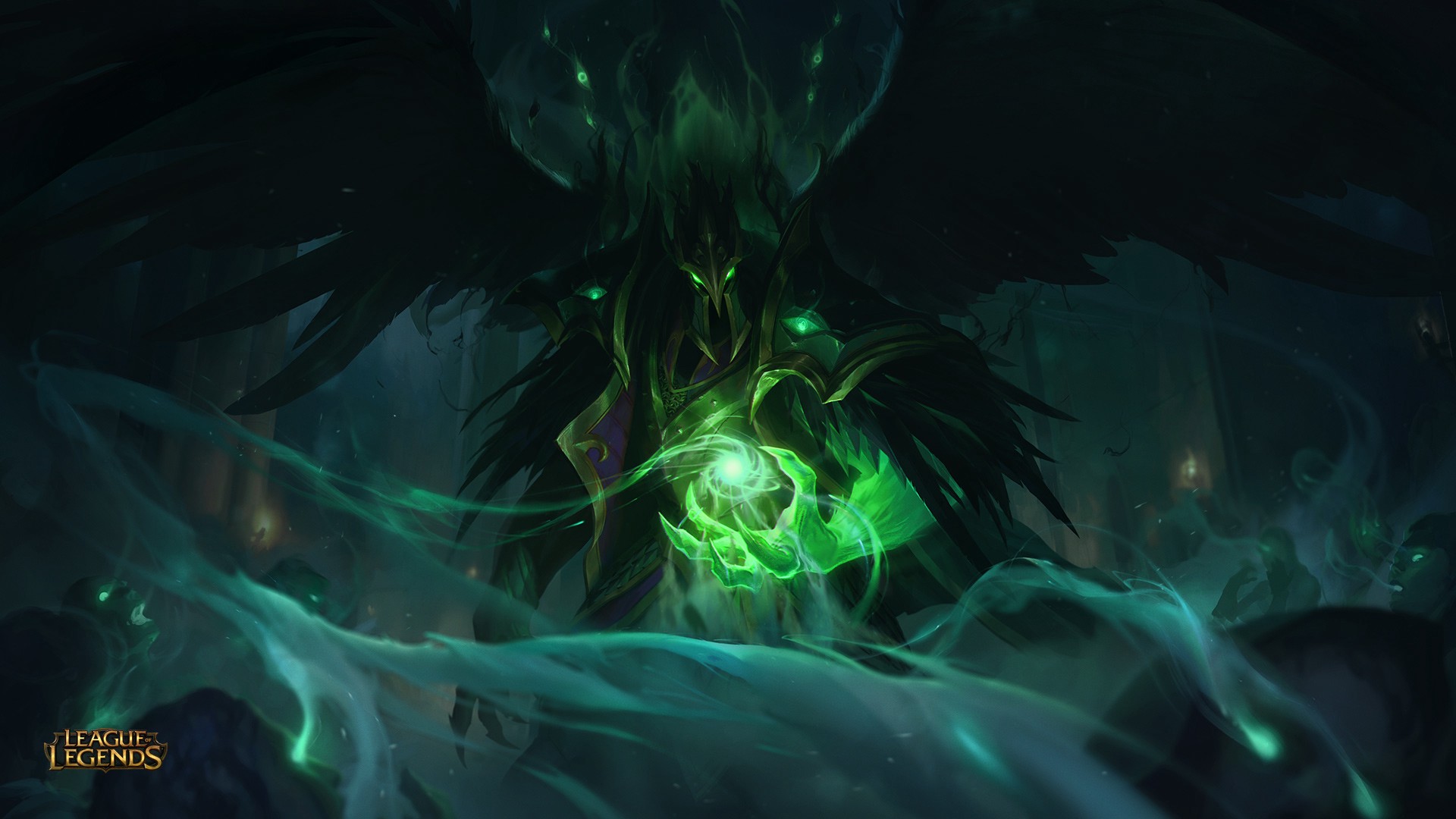 While it doesn’t look like Tyrant Swain is a Leprechaun, who knows what’s going on under that helmet. He might just be extremely tall.

One things for certain though; In a team of green skins, Tyrant Swain will stand out like a good battle commander should. His classically crimson demon arm is now a bright green, as are his ravens and his spells. His gold and dark blue robes create plenty of contrast, meaning that if your entire team is green, enemies will naturally notice Tyrant Swain.

This isn’t necessarily a bad thing. After all, Swain wants people around him; that’s how he wins! 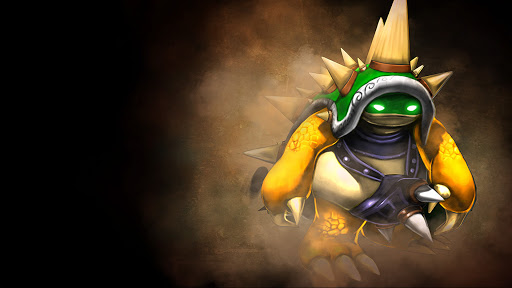 If you want a team full of St Patrick’s Day skins, then you’re going to need a Jungler. Unfortunately, there aren’t many green Jungler skins out there, but that’s where King Rammus comes in.

Sure, King Rammus might not seem like a particularly Irish skin, but he’s certainly green. Not only is the colour on brand though, King Rammus is also incredibly rare. One of the rarest skins in the game, in fact.

This skin is so rare that it was made unavailable before League of Legends was even officially released, and will only get rarer as time goes by. How then, do you obtain King Rammus?

While he might not be available in the LoL store, you might be able to pick him up in ours. We have new rare skins all the time, so be sure to check back regularly!