Smurfing in League of Legends is common; everyone has seen a 20/1 Riven or Rengar just snowballing through the game. Most players who smurf want to show off their win ratio and brag how much better they are and how fast they get back to their main elo.

We have the answers if you have ever wondered how smurfs and boosters do it.

First of all, smurfs think about the setup of the game. Particularly at the lower ELOs, the game's recurring aspects remain constant (Think from Iron to Diamond 4). For instance, 90% of junglers below Diamond 4 always begin their games near the bot lane camp, regardless of the game state. You have a significant head start because of this, and you should exploit it.

This tutorial is structured to demonstrate the mentality you should adopt when smurfing: the first section will cover typical strategies used at lower elos, and the second part will show the best champions for each strategy.

How to abuse Jungle starting location 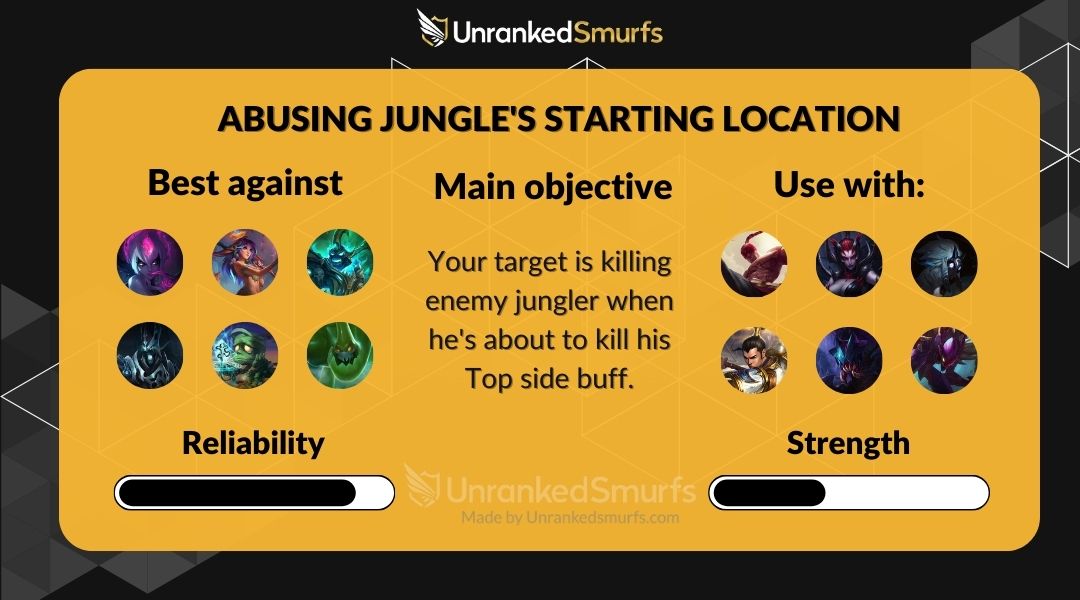 So we already established that most, if not all, junglers in lower ELOs start at the bottom buff. What this means for you is that regardless of the position you play, you can abuse it. If the enemy plays a full clear jungler such as Lilia, Hecarim, Karthus or alike, you can be almost sure that he will be at his top side buff at around the 2:15-2:35 mark if they play a ganking jungler such as Elise, Xin Zhao, Lee Sin then around 1:50-2:15.

If you are an early game jgler vs a farming jgler, what that means is that you can just invade him and kill him on his buff. Make sure your lanes are pushing before you do that.

If Jungle is not your thing and you are a top laner that can shove in early and move to the enemy top side buff and just go in and kill the enemy jungler. Most farming junglers get pretty low at the end of their clear, especially after the jungle changes, so they should not pose a significant threat. Remember that you need to be quick, or enemy lanes might collapse on you.

This is something you can consistently do every single game. Think what effect it has on the enemy team if their jungler dies after 3 minutes of the game.

The derivative tactic of it is avoiding enemy ganks at standard timers, usually from 2:35 - 3:15 is when you can expect the jungler to be on the top side after his first clear. 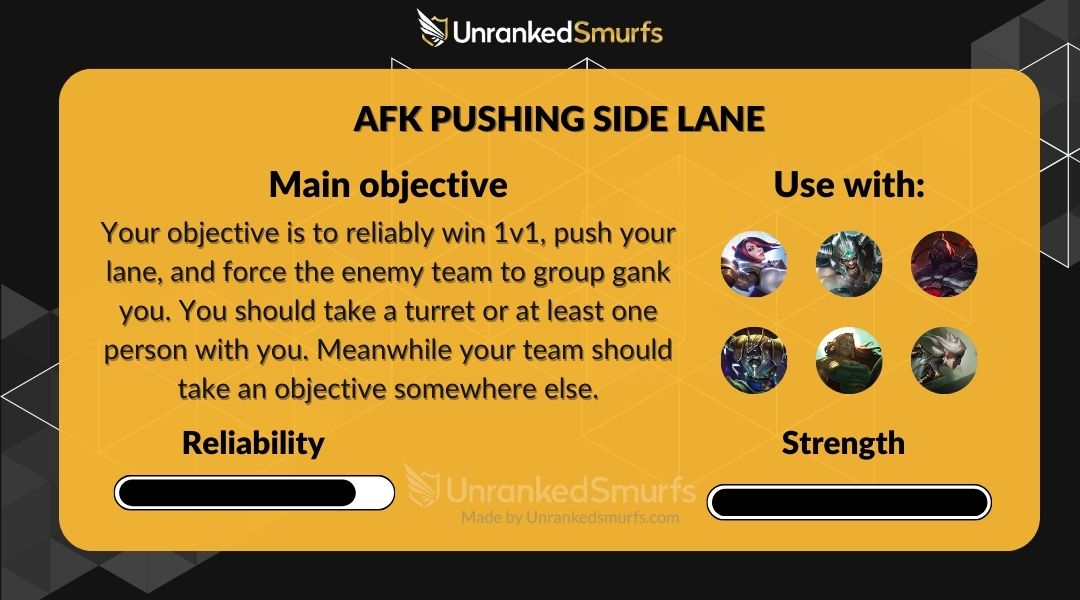 People at lower elos could be better at coordination. So techniques that require them to play together typically tilt them hard. Tryndamere or Sion split pushing strategies are two common examples. There was also a famous 0 damage challenge in which the goal was to deal 0 champion damage and win the game. You'd be shocked at how effective it is.

The strategy is simple: go to a side lane and push the wave. When you push the first wave from the middle of the lane, go to the bush and check the map state. Pay attention to where the enemies are. Do you see more than three enemies missing? It means they might be coming for you. Just wait a bit before pushing another wave.

If you see at least three enemy players on the map, you can confidently push the lane up until the enemy turret. Wait for an opening. You should be able to 1v1 or 1v2 most of the time.

Recommended champions: Tryndamere, Fiora, Nasus, Illaoi, Camilie (not her best use but possible) 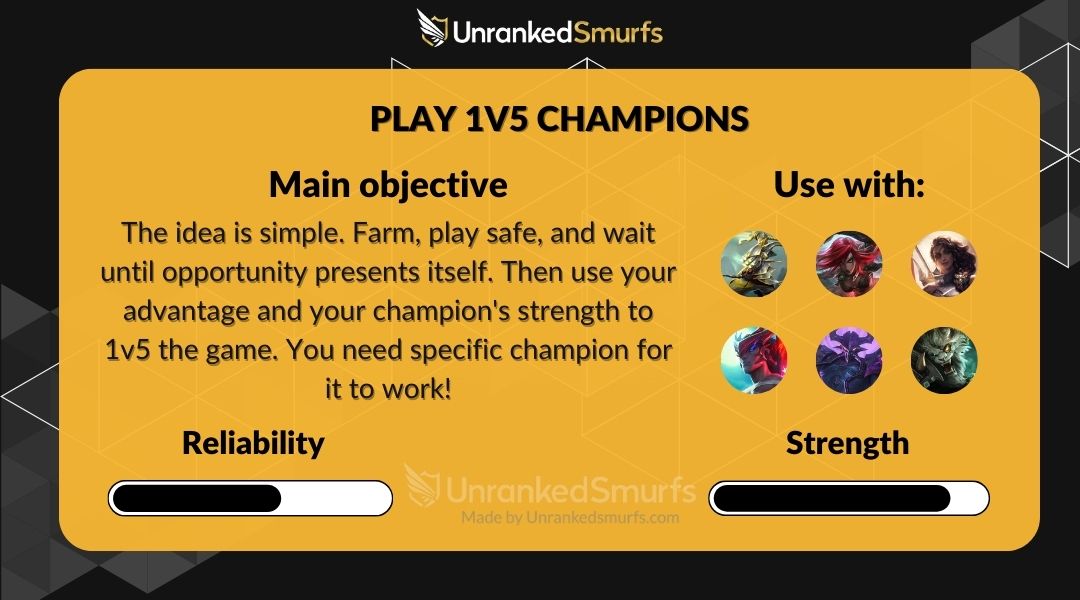 Working as a team to overcome a common obstacle is not something silver players do. Usually, low elo games look more similar to a deathmatch. That's why champions, usually hard-countered by CC, are so strong there. This strategy is even better if you are a last pick and the enemy team is low on crowd control.

It might sound straightforward, and it's, however, the hardest part is "Do not put yourself behind". It would help if you had a solid and calculating mindset when doing this. You need your summoner spells to outplay, so do not look for easy kills where there are none.

You might ruin your game plan if you get ganked or die on a gank early. If it happens, you will have to wait for the enemy team to throw the game.

Thank god it's silver, so you are guaranteed it will happen at some point. 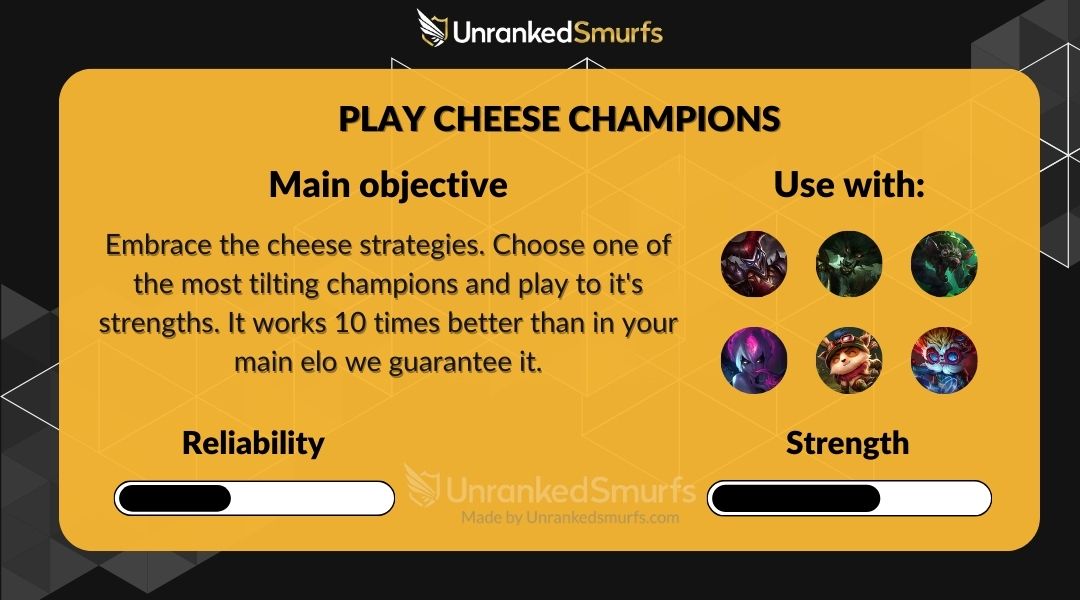 There is a reason why cheese strategies are widespread. Even if you know them, it's easy to fall for them. There is a wide variety of cheese available. The most common ones are invisible champions. If a low elo player can't see it, it means it doesn't exist, right? The number one abuser here is Twitch followed by Evelynn and Shaco. Everyone knows Twitch starts red and immediately goes for a mid lane gank… It works 90% of the time, anyway…

Another strategy is getting low because you know your champion can out-damage the enemy. A primary example here is Warwick, with a barrier on the top lane. Other common abusers are Kled and Illaoi.

A different cheese breed is an uncommon pick that works exceptionally well if appropriately applied. Ranged top laners such as Heimerdinger instantly deny the enemy top laner a game he's accustomed to. Instead, he becomes your little pet, unable to flee or fight. One of our boosters, Nestey, who works with us in BoostingBoss, is a master of this strategy. He is currently ranked the #1 Heimerdinger in the EU region and one of our best boosters. 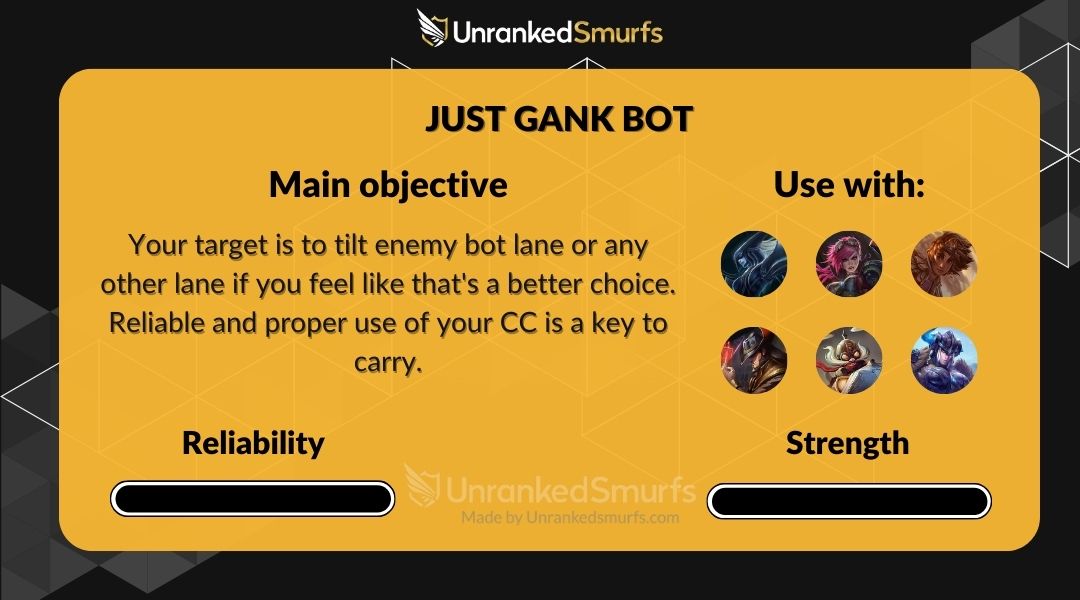 This approach is based on making repeated plays to one lane with guaranteed (or almost guaranteed) crowd control abilities. When using this approach, your main goal is to tilt the opposing player and farm him as hard as possible. Because of its weaker turret, the bot lane is the ideal lane to target. Similar to the 1v5 strategy, your primary goal is to not int before your champion is fully operational, which generally happens around level 6 for most Hard CC ganking champions.

This strategy works best for Mid and Jungle players due to their proximity to the bot lane and their roster of champions.

How to execute it? Simple as waiting until your level 6, shoving your lane and then roaming bot. Pink ward and a sweeper are your friends here.

Most of the time, low elo players won't even notice when you go into the fog of war. 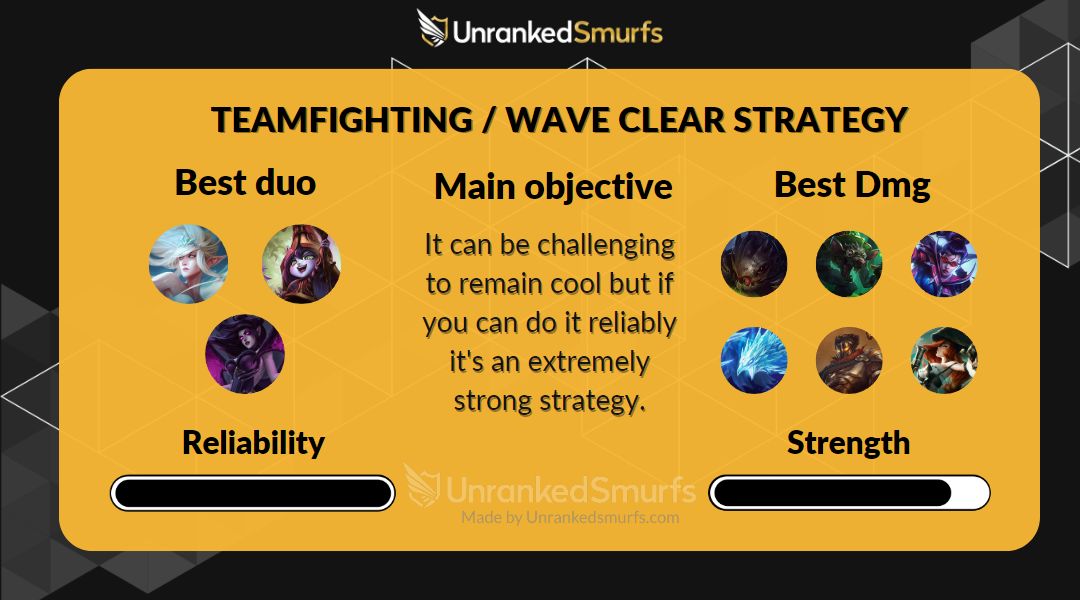 This tactic is only recommended if you play with a duo that complements your champion. The goal is to choose a champion who can slow down the game by clearing waves until you reach your power spikes. A champion with AOE abilities and a powerful mid / late game is typically required.

Keep an eye out for the opposing Jungle, play safe, and get to mid-lane as quickly as possible to protect the first turret. You should prioritize your core 2-3 items and seek out teamfights.

We're guessing you're eager to hop on summoners rift and crush some noobs. Before you do that, we'd want to explain why you can't find your favorite champion or position on our list. In low elo, you must carry and be a dependable damage dealer, which means you must be able to consistently 1v2, and 1v3.

It is 100% feasible to climb to your primary elo utilizing Alistar support, but it will take substantially longer on average. Therefore we do not recommend it if win ratio is something you care about. 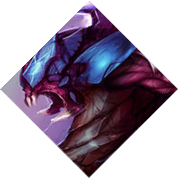 Challenger Coach - DyadCoaching.gg
My name is Corso and I am a multi-season Challenger Jungle main. I have been actively boosting for 7 seasons, and coaching for over 4 years. Now I work as a professional coach at DyadCoaching.gg and content partner at UnrankedSmurfs.com
BUY SMURF ACCOUNTS BUY RARE SKINS
29/11/2022 • Alistar Smyth
Before you buy a lol account from elitepvpers
29/11/2022
There's a good chance that if you're looking for an account in League of Legends, you've considered purchasing an account from ElitePvPers. You should be informed of the potential downsides.
Read more...
27/11/2022 • Alistar Smyth
How to see your LoL account's region?
27/11/2022
Learn what account region is and more than one way to check it.
Read more...
20/11/2022 • Alistar Smyth
What is a Hand leveled account
20/11/2022
Hand leveled account means that a person has manually leveled an account. In league of legends this usually means to level 30 or above, the level at which a ranked queue becomes available.
Read more...