The Best Mobile Apps for League of Legends

You are here: Home / Blog / The Best Mobile Apps for League of Legends

League of Legends is a hugely popular game with millions of players worldwide, and its popularity isn’t limited just to the PC.

There are currently hundreds of useful League of Legends mobile apps that can help you in game. From builds apps to counter pick apps, these mobile apps provide plenty of valuable information that can be used to your advantage. Why bother alt-tabbing out of your game when you can have your mobile or tablet right beside you?

We’ve scoured the app stores for the best League of Legends mobile apps and have hand-picked our favorite ones. These apps provide all kinds of information that you can use to take your game to the next level. Available on both Android and iOS we’ve also included the links to the relevant app stores just in case a particular app takes your fancy. 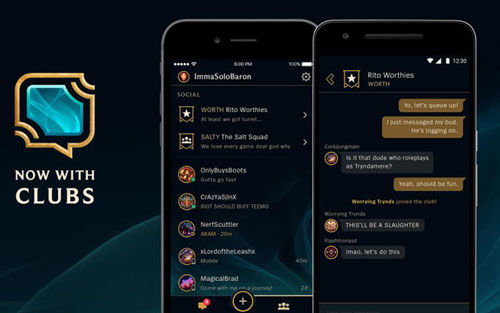 We start our list with the official mobile app from Riot themselves. League friends is the social app you’ve been looking for to communicate with your LoL friends on the go. This app allows you to view your friends list, talk to your friends and add new pals. All from the palm of your hand.

If you want to arrange a ranked match in the evening with your friends, then it’s always better to plan ahead. Why leave it to the last minute? You never know what they might have already have planned. League friends allows you to chat with your teammates and arrange games before you actually get on the computer. This means you won’t be left disappointed when all your friends decline your party invites!

Although there are other similar League of Legends social apps, some of them can be hard to trust. Would you really type in your account information without knowing where the data is going? With the official league friends app, you can be confident your account won’t get hacked overnight.

Available for iOS and Android, League friends currently has over 1,000,000 downloads! Just because you’re on the go doesn't mean you can't talk tactics with your league buddies. 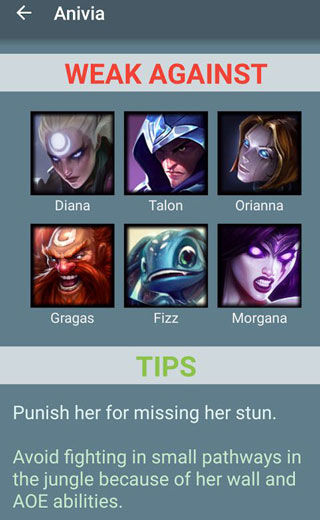 This useful app is perfect for when you are playing ranked matches. If you didn’t know, most champions in League of Legends have counter picks which they have trouble dealing with. This means if you find out what champion your opponent is going to play then you can easily pick another champion to counter it.

It might sound easy, but when you realise there are around 134 champions that are continually being updated and new ones being released it can get tricky. Luckily some clever boffin has created a really useful League of Legends mobile app.

This mobile app, available on both Apple and Android allows the user to see all the main counters for a selected champion. Simply enter your opponent’s champion, and it will display all the relative counter champions.

The app works perfectly without any WiFi connection which is good as it means no lag or slowdowns during your game. If you want to dominate your opponent in game easily, then this useful mobile app will give you all the information you need. 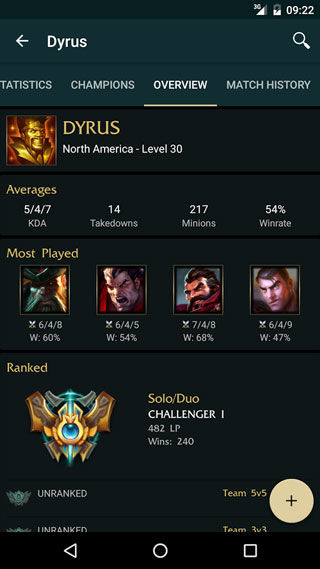 Before you start a game, there is a lot of information you can gather from just a summoner's name. On the loading screen while you are waiting for the game to load you can already see all of your opponents and what champions they will be playing.

If you want to gain an advantage which will help you perform better in game, then you need the Summoner’s Companion for LoL. This mobile app allows you to access and analyze any summoner’s match history, statistics, and rank. This can give you an insight into what build they are going to go for before the game has even begun.

If spying on your enemy’s statistics wasn’t enough, then you’ll be pleased to know there’s more. The app also includes plenty of champion guides, including the best counter picks and how to play against certain champions. There is also a built-in encyclopaedia that includes all the champions, items, runes and masteries. This is a good reference if you don't want to use your valuable internet to search for information or you fancy doing a bit of research while on the go.

Packed with plenty of useful information, the Summoner’s Companion for LoL is a great resource that has everything you’ll need. 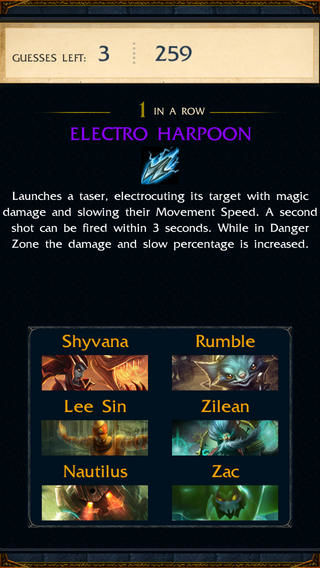 So you’ve been playing League of Legends for a while, and you’re in Platinum. Think you’re a good player? Prove it.

The Quiz for League of Legends app allows you to do exactly that. Have you been stuck on the loading screen for 5 minutes or miss League of Legends while you are at work? Give in to your cravings and take a League of Legends quiz. With the questions, you’ll solve different types of levels, unlock various achievements and even compete with your friends on the online leaderboard.

With some quizzes lasting 2 minutes, there’s always enough time to fit a quiz in! Familiarize yourself with all the champions and items in game by testing your item build knowledge. What does Vampiric Scepter build into? How many items are required to build the Bloodthirster? What are the stats for Warmog’s Armor? If you can’t answer these, then you need to brush up on your item knowledge!

Available on the Google play store and Apple store, the app is continuously updated to make sure it has all the newest items and new questions that will leave you scratching your head.

So there’s our list of the best League of Legends mobile apps. We hope you find these useful and use them in your game to help destroy your opponents.